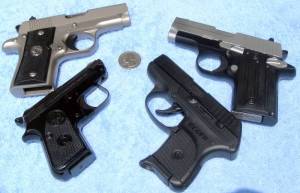 I was recently involved in a conversation on a discussion forum at my friend Adam Litke’s Facebook page for his company, Shield and a Sword Academy.  I felt that the information was worth sharing with others because I managed to give a short, succinct, detailed answer that quite a few people found informative.

Carry guns are totally a compromise.  I’m somewhat old school. Function over form, as much power as you can manage, and figure out how to tuck it away if you have to.

The average person, however, is much more driven by easy of conceal-ability and price. There’s a different mindset between “gun guys” and a person who just wants to be able to protect themselves. Another thing to consider is that a lot of people think you need to arm yourself to “go to war” in order to carry. In my mind, a carry gun is most often a “last stand” weapon and should be adequate to meet the ‘rule of 3’s.’ (The average self defense scenario happens in less than 3 seconds, at 3 feet away with 3 shots fired.)

My personal preference, due to the fact that I can’t wear restrictive clothing or anything that puts long-term pressure against my body, is for either a Walther PPK/s or my wife’s J-frame Smith and Wesson 642 Airlite .38 special. For a last stand, .380 or .38 special is more than adequate. Even .32 ACP will suffice from me to you in a close fight, given the right ammo. If I were to absolutely KNOW I was going into a situation where I has a huge probability of having to defend myself, my Para p13.45 .45 ACP would be on my person loaded with Golden Saber’s or HST’s.

There are so many factors in carry weapons to consider, function, features, price, power, but the only one that matters to begin with is this… Is it a hassle to carry it to the point that someone will think about making a compromise and NOT carrying it? If it is, it’s the wrong weapon for that weapon. A .22 mouse gun you’re comfortable sticking in your pocket EVERY TIME you walk out the door is worth more than a $2500 Kimber 1911 that someone lets sit because they have to go through gyrations to conceal it.

At the end of the day I feel it’s important to educate people on the best option, encourage them in any way we can to seek out the best options for them, and then support them and teach them how to use what they decide to carry. The gun you have is worth 1000 of the one you don’t.

This site uses Akismet to reduce spam. Learn how your comment data is processed.