An article in USA Today this morning tells the tale of a two year old Minnesota boy who rode his electric toy tractor to the county fair without his parents knowing he was going. Slacker… Back in my youth, I walked if I was going to make such an excursion… 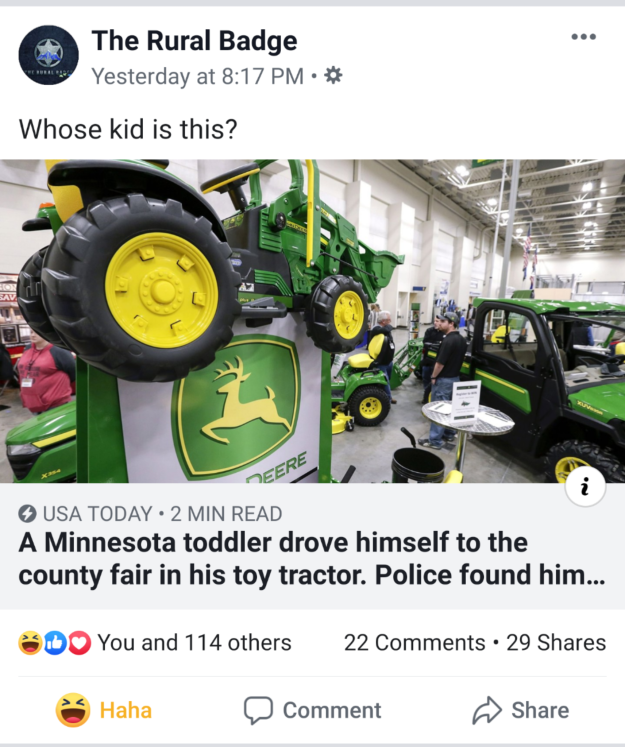 From 1976 to 1978 my family lived in the now-gone Kent State University married student housing complex, called the Allerton Apartments. To be honest, I can only speculate that my 3-4 year old brain’s logic involved “I want ice cream. We don’t have ice cream. DQ always has ice cream. I’m going to go to DQ.” This all went down in the morning, apparently before my parents were awake. I grabbed some money, climbed out the front window and went walking. I don’t recall much about the actual trip other than I got to Dairy Queen and they were not open yet.

I walked almost a mile and must have been frustrated and must have decided to wait so I crossed Ohio SR 43 and walked down to University Plaza and I guess I ended up at some insurance company who realized that I probably should not be out wandering alone, gave me a hot cocoa and a chair, and called the police. I must have known where I lived because they gave me a ride home and the version in my head involves them knocking on the door, no one having realized that I left, and my folks being upset. I should ask my mother if that’s how it all ended up, she likes ice cream, too.

So yeah, in my day, when we wanted to toddle off on grand adventures, we walked. Kids these days have it easy.

This site uses Akismet to reduce spam. Learn how your comment data is processed.