My grandfathers were both shooters, my dad’s father was an amateur competition trap shooter, trick shooter and marksman from his World War 2 service in the United States Marine Corps, my mother’s dad from growing up hunting in the hills of Smith County, West Virginia. As I spent a lot more time with my Pap Ashcraft, mom’s dad, he took on the task of teaching me to shoot and started a life long love of firearms.

The rifle above is a single shot, Stevens Junior Model 11. It is identical to the one that my pap taught me to shoot on and that I fired literally thousands of rounds through. It served several generations of our family only to go missing after his death. The rifle was older and field worn. It had many repairs over the years but it shot true. Simple, non adjustable iron sights, manual extraction and loading, and you clocked the hammer to fire it. The trigger was crisp and effortless and it just managed to hit exactly where you wanted out to over 100 yards. It was not unusual for me to toss a soup can out into the yard and then shoot it until it rolled down over the hill over 100 yards away. But, most often my target was a paper plate with a dot in middle that pap would set up at 50 or 100 feet away. 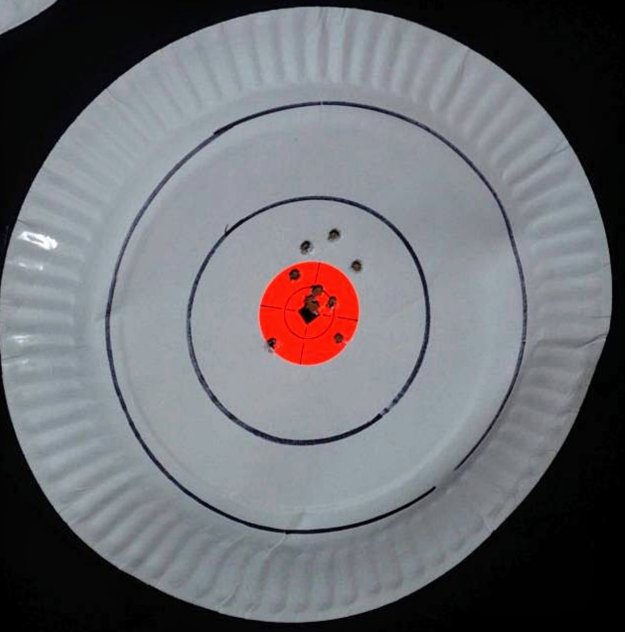 I would sit or stand on the back step and put round after round through that rifle. Usually 50 or 100 rounds at a session several times over each visit. Every hardware store and bait shop knew what I wanted when I showed up for miles around. Yes, they would sell live ammo to a 5, 7, 13 or whatever age boy… Kids didn’t do the stupid stuff with guns then they do now. Probably still was technically illegal, no one cared.

To this day if I had that rifle I could likely dispatch a soda can at 100 yards with it on the first shot. My pap taught me the gun, then gun taught me to shoot it the way it needed to be shot to put rounds on target. The tool was the tool, you adjusted to it.

My grandfather instilled in me what later became the 4 rules of firearms safety that are taught today:

I seriously need to find another model 11. I own some of the most advanced firearms in the world but my heart longs for that old, beat up, well loved rifle. I hope whoever has it appreciates it.

I don’t know how any of those hundreds of thousands of GI’s who carried 1911’s ever made it home alive… All with FMJ, too! It’s not about the tool, it’s about how you use it, maintain it, and train with it. Capacity is a factor, of course, as are many other things, but anyone who wants to try to tell me that 1911’s are unreliable and finicky and hard to work on I will HAPPILY take to a VFW hall of your choice and let the guys and gals there show you how fast someone who has TRAINED WITH THEIR WEAPON SYSTEM can tear down, clean, and reassemble one, and then we’ll go to the range and they can show you how horribly these guns shoot. Sure, it’s a 100 year old design, and there are newer, perhaps better designs, but the 1911 is NOT some mystical anachronism. Strangely, the United States Marine Corps just went BACK to a modified 1911 for their Close Quarter Battle Pistol. You can prefer a newer design, you can find it to be something that works better for you, but this bullshit of people saying it’s an unreliable and incapable firearm is getting on my nerves. Pick what works best for YOU and stop telling other people why they’re wrong. The gun YOU want is the gun YOU should shoot, use, carry, whatever. But don’t dog on someone else because they’ve decided to go a different route. If one design were the be all and end all, everyone would make it, carry it and use it and nothing else would need to be sold. the 1911 has stood the test of time, has been copied, modified, upgraded and made in nearly every caliber you can think of from .22LR to 32acp, 380acp, 9mm, .38 super, .40 S&W, 10mm, .45 ACP and yes, even .357 magnum. If it were such an inferior design, no one would bother.

Personally, if I wanted a 1911 for carry today I’d probably go buy a Colt® M1070CQBP, which is what the USMC is going to be using. I would then learn the few changes it has over the 1911’s I am familiar with, and love it long time. If you want to carry a Glock 17, a Walther PPK, a Smith and Wesson J-frame or a North American Arms .22LR revolver, well, God Bless You. Everyone has their own reasons for picking what they pick. I don’t understand the constant need to proselytize one design over another. There are VERY few bad firearms designs out there anymore, and even fewer poorly made weapons. In the day of the Internet, word gets around too quickly and a bad design or process can kill a company.

As to the Ruger SR1911, before you consider one I would HIGHLY recommend you google search “sr1911 rust.”

Sorry for the soapbox, but people need to understand that there is no one solution for everyone. Use what works for you, and be ready for what you have to. Period.

I was recently involved in a conversation on a discussion forum at my friend Adam Litke’s Facebook page for his company, Shield and a Sword Academy.  I felt that the information was worth sharing with others because I managed to give a short, succinct, detailed answer that quite a few people found informative.

Carry guns are totally a compromise.  I’m somewhat old school. Function over form, as much power as you can manage, and figure out how to tuck it away if you have to.

The average person, however, is much more driven by easy of conceal-ability and price. There’s a different mindset between “gun guys” and a person who just wants to be able to protect themselves. Another thing to consider is that a lot of people think you need to arm yourself to “go to war” in order to carry. In my mind, a carry gun is most often a “last stand” weapon and should be adequate to meet the ‘rule of 3’s.’ (The average self defense scenario happens in less than 3 seconds, at 3 feet away with 3 shots fired.)

My personal preference, due to the fact that I can’t wear restrictive clothing or anything that puts long-term pressure against my body, is for either a Walther PPK/s or my wife’s J-frame Smith and Wesson 642 Airlite .38 special. For a last stand, .380 or .38 special is more than adequate. Even .32 ACP will suffice from me to you in a close fight, given the right ammo. If I were to absolutely KNOW I was going into a situation where I has a huge probability of having to defend myself, my Para p13.45 .45 ACP would be on my person loaded with Golden Saber’s or HST’s.

There are so many factors in carry weapons to consider, function, features, price, power, but the only one that matters to begin with is this… Is it a hassle to carry it to the point that someone will think about making a compromise and NOT carrying it? If it is, it’s the wrong weapon for that weapon. A .22 mouse gun you’re comfortable sticking in your pocket EVERY TIME you walk out the door is worth more than a $2500 Kimber 1911 that someone lets sit because they have to go through gyrations to conceal it.

At the end of the day I feel it’s important to educate people on the best option, encourage them in any way we can to seek out the best options for them, and then support them and teach them how to use what they decide to carry. The gun you have is worth 1000 of the one you don’t.

Ever got curious about something and started digging? I knew the .44 magnum 180gr JSP’s Remington makes hit hard. I started doing some research on them. Out of my Super Blackhawk they should hit 1600fps at the end of the barrel… That works out to 1023ftlbs of muzzle energy and 1181fps with 557ftlbs at 100 yards. Nice. But out of my Rossi 1892 with the 24″ barrel they clock out the end at a documented 2425 fps. That works out to 2350 ftlbs of muzzle energy. At 100 yards they are still moving at 1804 fps and carrying 1301 ftlbs of energy. When we shot up that server we were about 20 yards away. That means each shot that hit the server was clocking out at 2282fps and carrying 2081 ftlbs of energy. Or… A ton+ plus, per shot. It holds 12+1. This means that I carry 30,550 ftlbs of muzzle energy from my rifle… 6,138 ftlbs from my revolver… Without reloading, totally effective out too at least 200 yards with either, and well beyond with the rifle. At 500 yards the rifle is still holding over 800fps and over 225 ftlbs of energy. This makes me happy! 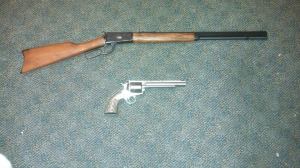 Wherein I use a demonstration that my Grandfather Harlan J. Ashcraft used 36 years ago to teach me the safety and respected needed when operating ANY firearm.